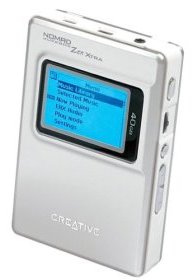 For the last couple years, I've owned a Creative Zen Xtra Nomad 40 GB mp3 player (which you can see a picture of the the right). I bought it instead of an iPod because when I bought it iPods were much more expensive. I have a large music collection, so I wanted an mp3 player with a lot of capacity. I would hate having to pick and choose what music to put on the mp3 player and what music to leave off. It was nice bringing it to China, because I brought my entire music collection simply by having it along :). Anyhow, when I bought it, this mp3 player was $200 cheaper than the 40 GB iPod. So it definitely gave me a better bang for the buck than the iPod.

Yesterday it finally died on me. It simply won't turn on anymore. I'm not sure what happened--it was working fine the previous day and has never shown any problems turning on--but my best guess is that it get a little wet because I had it in the same compartment of my backpack that had a sealed water bottle, and the condensation was particularly wet this time.

I've used it to play music in my classes for a couple different lessons this semester, and I'd like to be able to do that again next semester. Also, I'll be travelling for about 10 weeks during winter break, and really don't want to go all that time without having music. So I'd like to get a new mp3 player. Luckily, I found out yesterday that my church wants to send me a care package soon. So, I can order an mp3 player online, have it shipping to them, and they can include it in the package they send me.

So, for all of you reading this: what do you recommend? The prices on iPods have sure fallen the last couple of years, so this time I'm considering an iPod. In addition, I've been thinking that something else I could use is an external hard drive, because the computer the school has given me doesn't have a CD burner and I'm going to want a way to bring all my pictures home at the end of the year. I found a 60 GB iPod for $290. This would kill two birds with one stone as it can also function as an external hard drive. I think 60 GB would be more than enough to store all my music plus all the photos I take this year.

If you know of a place I can get a better price than Amazon, I'd be interested in hearing about that, too.