National Day Holiday
Oct 8, 2006 - 24 Photos
Well, I'm back in Qinhuangdao after travelling for over a week. I travelled with 9 other people (7 Americans, 1 South Korean, 1 Chinese). Overall, we got to see some cool stuff, but there were some frustrating things on the trip, too. I'll try to describe the trip chronologically. If you just want to see the pictures, click the photo album to the right.

On Saturday (Sept. 30th), we took a bus from Qinhuangdao to Dalian. Dalian is a port city in northeast China and is supposed to be one of the most prosperous cities in China. Being prosperous, it had a Starbucks. I tried to tell them I should get a discount because I'm from Seattle and Starbucks started in Seattle....but they didn't bite :(. Still, it was nice to get a decent cup of coffee :). Dalian has some things that are pretty cool to see when you're in town, but it's definitely not a place I would make a trip to just to see it. It was really just our starting point for the trip so we could make it to Changbai Shan. Anyhow, here are some of the cool things we saw: 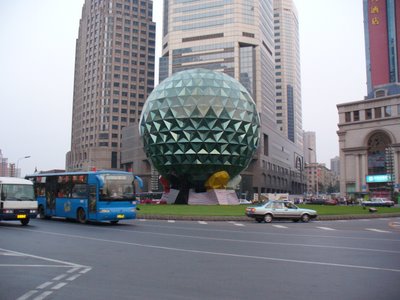 The Crystal Ball of Dalian, right in the middle of a traffic circle in Friendship Square. This is supposedly the symbol of Dalian. 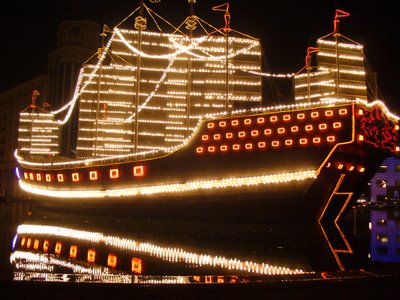 This boat sat in a pool of water in the middle of a traffic circle near Dalian harbor. It was very cool at night when it lit up, as it is above. 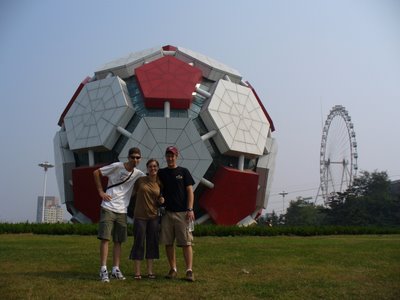 Mark, Krystal and I in front of the giant soccer ball in Labor Park in Dalian. 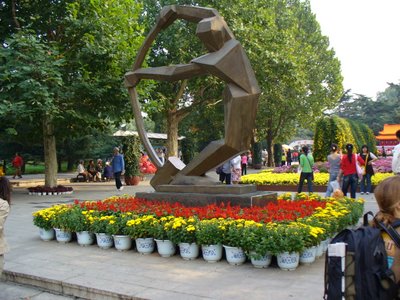 A sculpture in Labor Park in Dalian.
We also took a tour van for most of our first full day in Dalian. This turned out to be more trouble then it was worth. In China, tour guides always get commissions for taking the tourist to particular places where the tourist is expected to spend money. This may or may not be a good spot to go see. Before we agreed to take the tour, the ladies who were selling us the tour agreed that we would be able to decide where the tour van took us, since it was just the 10 of us in the van, so that we could avoid the lame tourist traps and go to places we really wanted to see. Unfortunately, the ladies either didn't communicate this agreement to the tour guides or the tour guides chose to ignore it...but they wouldn't listen to what we wanted to do at all. Instead they took us to a firing range where we could pay money to shoot a chicken and to a market where we could buy jade necklaces. It was very frustrating...but you learn from these experiences. They did take us to one very cool place: Drinking Dinosaur. Drinking Dinosaur is a coastal location near Dalian with some amazing rock formations jutting out into the sea. Some pictures for your enjoyment: 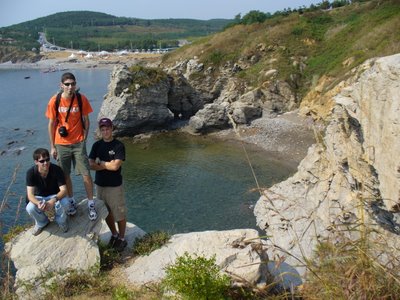 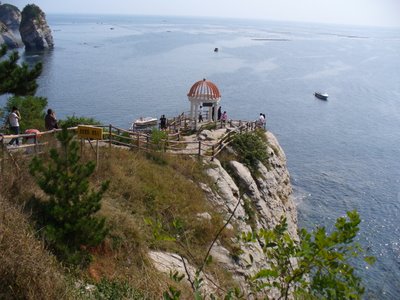 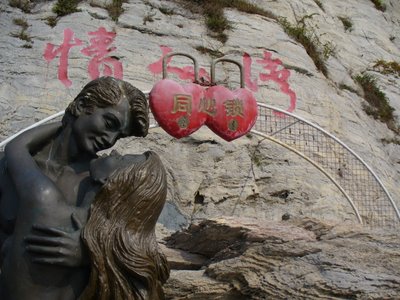 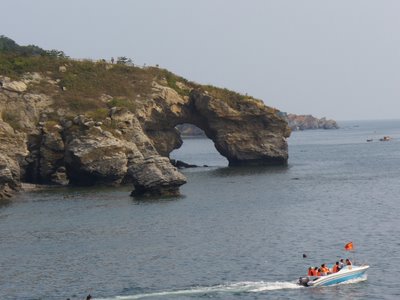 From Dalian, we had train tickets to Tonghua to try to continue on to Changbai Shan. We were told by the ticket counter that the train leaves at 5 PM. One of our group had all the tickets, noticed the time printed on the ticket was 16:07 and figured that meant 5:07 PM. He didn't take the time to do the military time math and figure out 16:00 is 4 PM. So when we got there at 4:30 to catch the train, we realized we missed it :(. It wasn't a good feeling. Instead we caught a later train to Changchun, the capital of Jilin province. The train was an overnight sleeper train--the bunk beds were stacked 3 high. It wasn't exactly the easiest place to sleep, but it was nice to have a bed on the train. After spending a day in Changchun (going to their Walmart, among other things!), we continued on with another train to Dunhua, and then took a bus to Baihe, which was only about an hour away from Changbai Shan. In Baihe we managed to get a hotel for 20 RMB per person per night--$2.50! It didn't have a shower, but the rooms were very clean and you can't beat that price.

Changbai Shan means "always white mountain". I'm not really sure why it's called that--yes, it was a mountain (and a fantastic one at that), but it wasn't white. In spite of the name, it isn't always white. Changbai Shan's main attraction is Tianchi, the Heavenly Lake. This is the highest crater lake in China, at an elevation of 7180 feet and it's a pretty incredible site. The lake is also right on the border between China and North Korea. To get there, you hop in a jeep that speeds up this road with lots of switch backs. The drivers seem to know this road like the back of their hand, because they don't even bother to slow down for the hairpin turns. It was a pretty fun ride--it felt a bit like a roller coaster--but it certainly didn't feel safe. Here's some video I took of the ride up.

The view from where the jeeps take you is absolutely breathtaking. The jeeps take you to some peaks way above the lake (probably several hundred meters, at least) where you can look down onto the lake. Here's a panorama video and some pictures for your enjoyment: 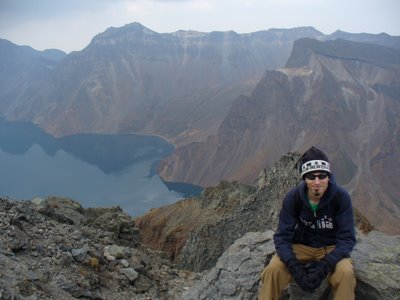 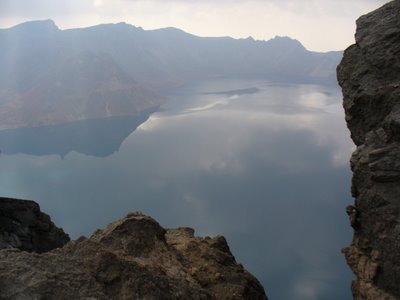 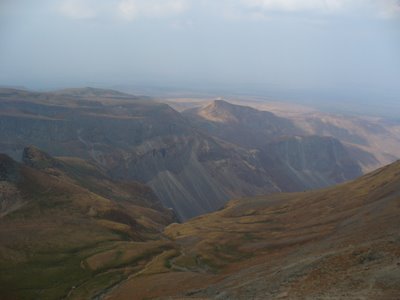 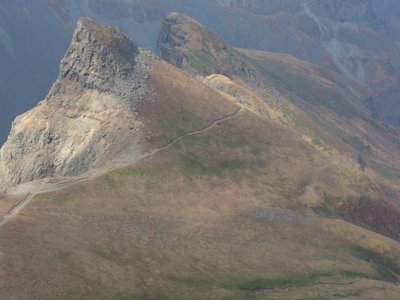 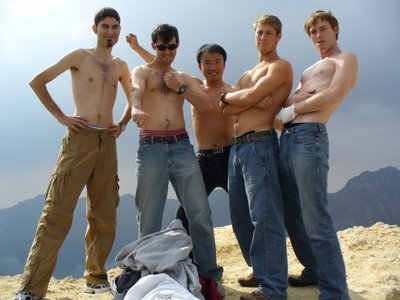 In spite of the temperature being barely above freezing level, we couldn't resist taking our shirts off for a photo. 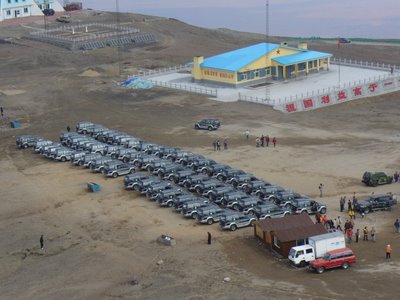 
After the jeeps took us down to the bottom (again, with a pretty crazy but fun ride), we hiked up directly to the heavenly lake's beach, passing a waterfall on the way. The hike up was incredibly tiring--it was a long tunnel with tons of stairs to climb up. Without a doubt, it was the longest stair case I've ever climbed. I counted on the way down. From the top down to the base of the waterfall I counted 906 stairs. I must be a pretty accurate counter, because after I told that to our Chinese friend Robin, he pointed out that the sign said it was 905 stairs. It was quite a few stairs from the base of the waterfall to the parking lot where we could catch a bus--in all, 1155 stairs, which I think is the highest I've ever counted. As I said, the hike was very tiring, but worth it in the end. Some pictures: 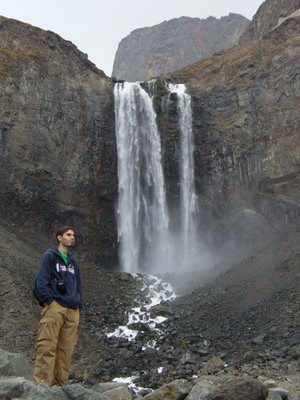 The Waterfall at Changbai Shan. 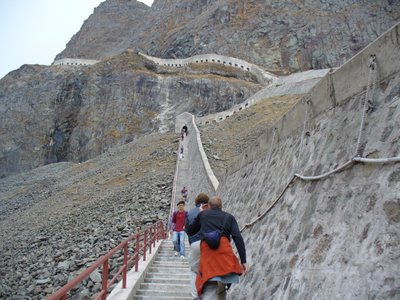 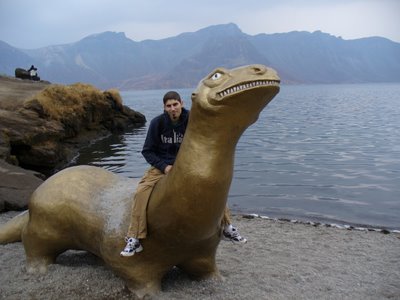 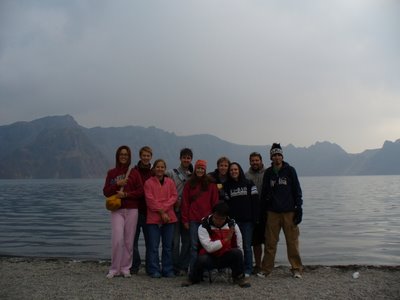 The entire group on the beach at the Heavenly Lake.