I know this is a week late, but I've been having more issues accessing blogspot. However, I've found a way to work around the Great Firewall of China, so I shouldn't have any more problems accessing this, unless they wise up and block my work around. We'll see.

Anyhow, on Halloween night, the school took all of the foreign teachers out to a special meal. They told us that the meal was because we have been so patient about the lack of running water in our apartments these last two months. However, when we got to the restaurant, they had signs out every where saying "A special night of Halloween for foreign experts in Qinhuangdao" and there were lots of other foreigners from other schools in town. So I'm not entirely sure that it was just to thank us for our patience....but it was a nice guesture, nonetheless.

The restaurant was excellent--they served a multi-course meal of western food. Salad, bread, soup, chicken breast or steak, coffee or tea, and ice cream. Many of the waiters were dressed up with halloween masks. They had a Chinese music ensemble playing traditional Chinese music that was pretty neat. It was an interesting mix of western instruments and Chinese instruments--Cello, flute, hammered dulcimer and a bunch of Chinese instruments that I don't know the words for.

The local news even showed up, and they roped the three of us foreign teachers who played piano into playing the piano at the restaurant while the camera recorded us. I guess they were going to put us on TV or something. It would have been nice to have gotten some advance warning, but it was still pretty fun all the same.

Here's some media for your enjoyment: 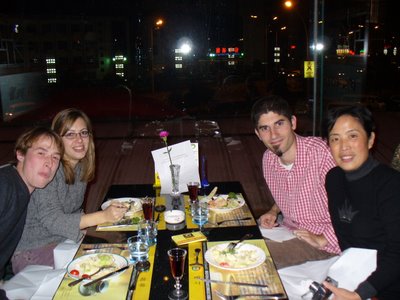 Chad, Krystal, Linda and I at our table. Chad and Krystal are a married couple from Oklahoma teaching here. Linda works for the school in the international cooperation office. 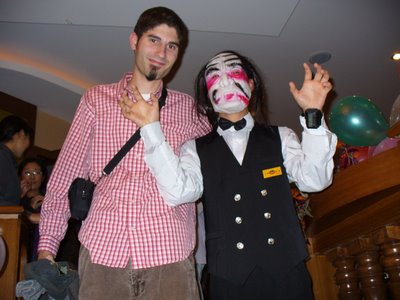 One of the waiters in his halloween mask. 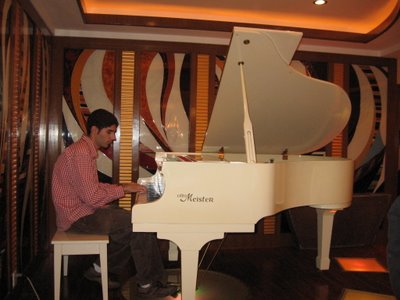 Me, playing piano, without any prior warning. 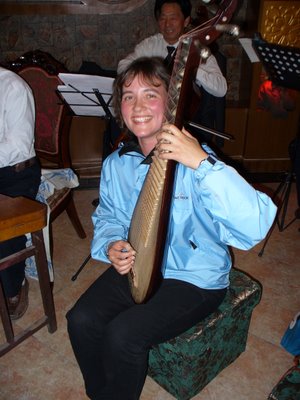 This is Ruth, another one of the ELT Edge teachers, messing around with one of the traditional Chinese instruments. She plays violin, so I think she could probably play this pretty well if she really tried.