After spending a few days in Chengdu, Drew and I flew to Lhasa, Tibet on the morning of February 1st.  In retrospect, flying to Tibet probably wasn't the best idea, since you are supposed to gradually adjust to the altitude rather than jumping in with both feet, so to speak.  But given what else we wanted to do on this trip and when spring semester began, we were short on time, so we flew.

In case you didn't know, Tibet is on a high plateau, most of which is over 12,000 feet.  The air at 12,000 feet is very different from how it is at sea level.  It has much less oxygen.  To make matters worse, I've had this weird problem my whole life: every time I've ever had blood taken, for a blood test or whatever, I always begin to black out, hear a strange ringing in my ears and just feel generally awful--unless I'm lying down while the blood is taken.  And that's exactly what the Tibetan air did to me.  After our plane landed, I stood up, and I could feel a black out coming on, so I promptly sat down and let everyone else get off the plane.  But I couldn't stay sitting forever, so I stood up, walked down the stairs and promptly collapsed on the tarmac.  These Chinese dudes came to my aid and helped stand me up and get me on my way...and then I collapsed again.  My head hit the concrete this time and blood was rushing everywhere.  (Just kidding about that last sentence...but wouldn't that make a better story?)  Again, the Chinese guys stood me up, and walked with me into the airport.  Once I got inside, I was okay.  Drew later told me that I looked blue at the time.  The Tibetan air really does make a difference.  When we got to our hostel, we had to walk up four flights of stairs to our room, and it was seriously about as exhausting as the 1,200 stairs we had climbed at Wat Tham Suea in Krabi.  We spent our whole first day just sleeping.  Given the physical strain Tibet puts on you, it's not really a place you enjoy visiting.  Nevertheless, I'm very glad I got to visit Tibet.  It's a special place very few people ever get to see. 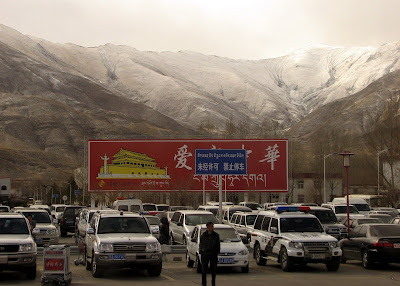 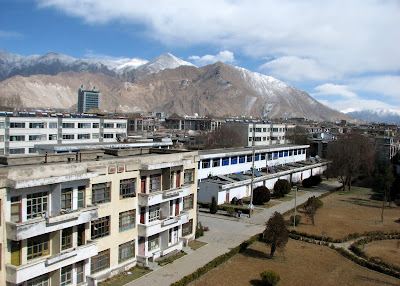 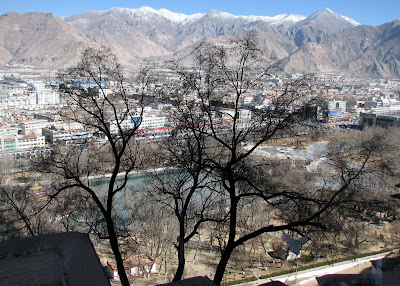 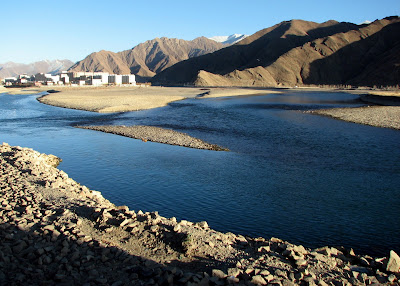 Lhasa is by far the least-polluted Chinese city I've visited.  You can see so much farther than you can in the haze of Beijing or Shanghai.  And everywhere you look, you are surrounded by mountains. 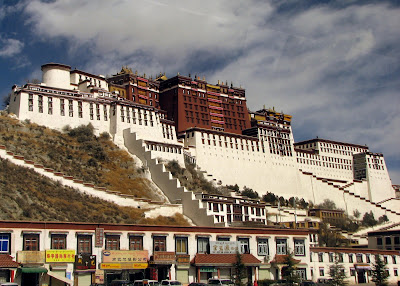 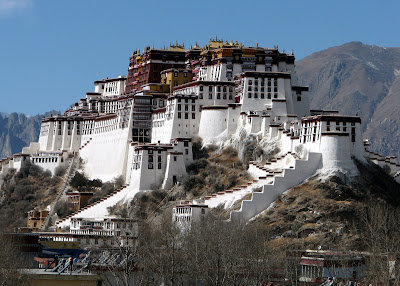 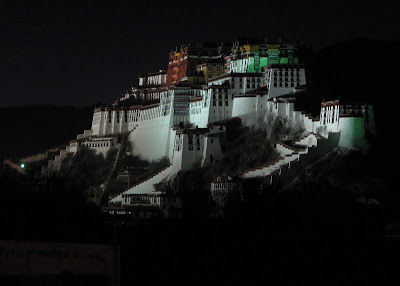 Potala Palace, the old seat of the Tibetan government and the winter residence of the Dalai Lamas.  It was built in the 17th century.  Unfortunately, we weren't allowed to take photos inside, so all you get to see is the outside. 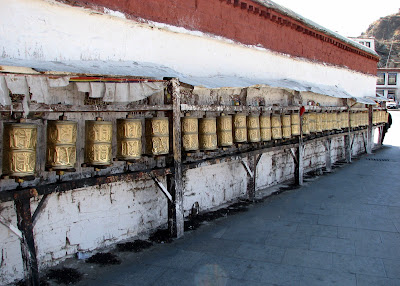 All over Tibet there are these rotating cylinders.  I'm not sure what it means, but the Tibetans spin them as they walk by. 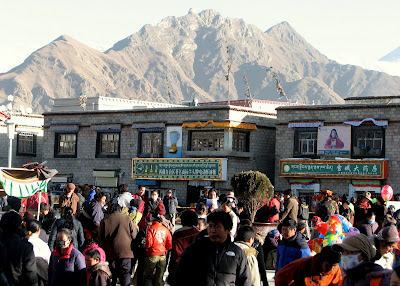 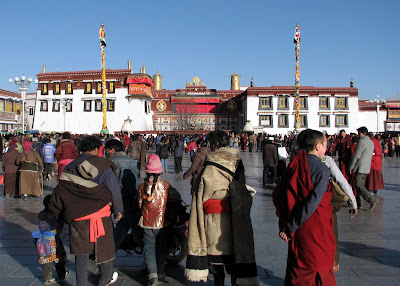 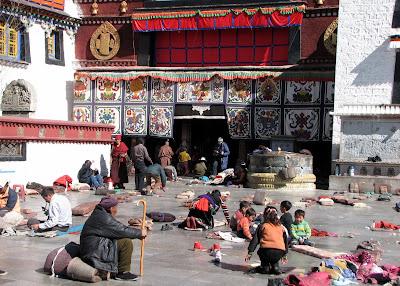 The Jokhang Temple in the Barkhor circuit.  Tibetan pilgrims walk this circuit and fall face down every few feet, prostrating themselves as an act of worship. 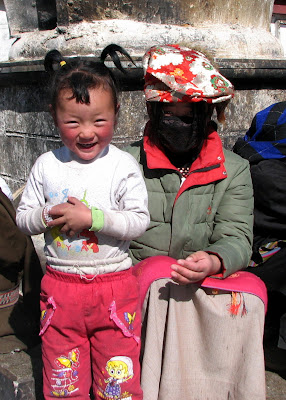 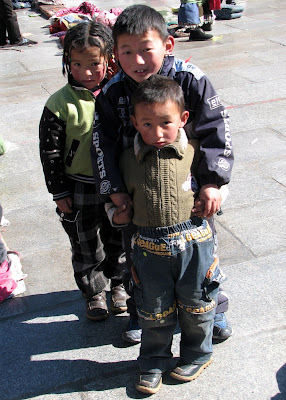 After returning to Lhasa from Shigatse, we went to the nearby Drepung Monastery, what was once one of the largest monasteries in the world.  Before Chinese soldiers marched into Lhasa in 1959, there were about 7,000 monks here. 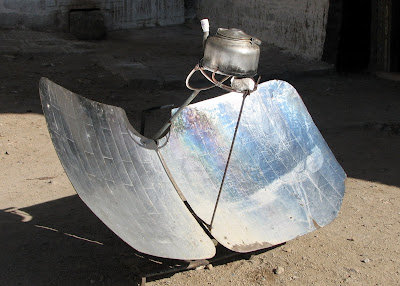 A sun-heated kettle at Drepung Monastery. 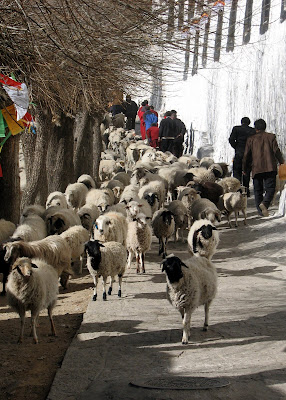 Sheep at the monastery. 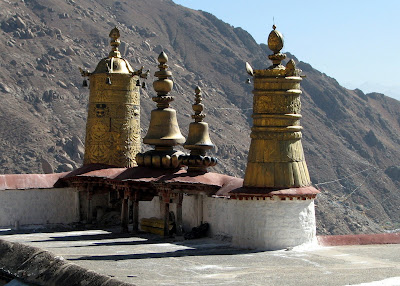 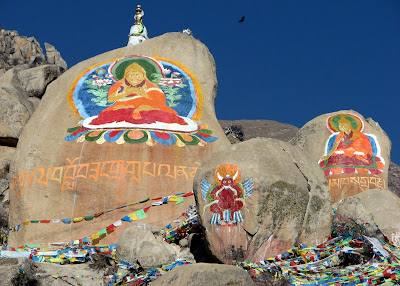 This gives you an idea of what Tibetan writing looks like.  It's entirely different from any other script I have seen. 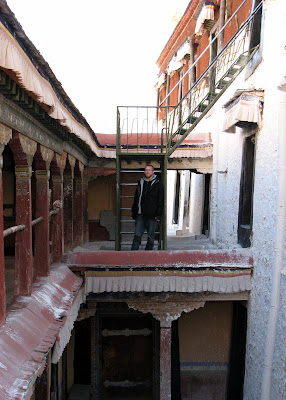 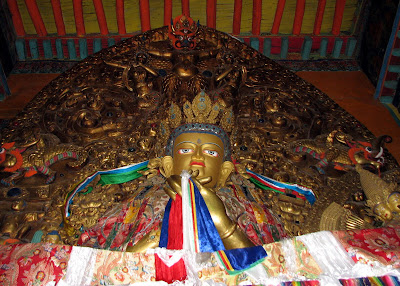 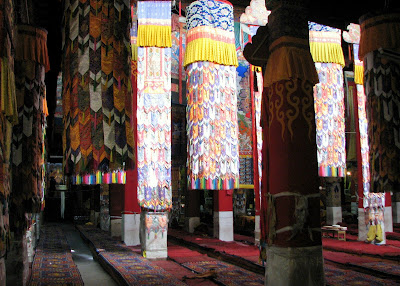 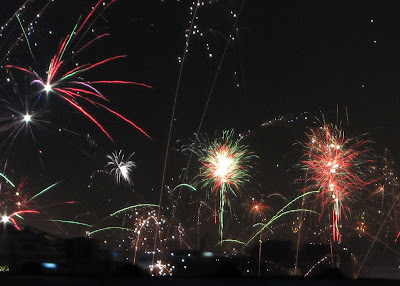