After spending a week in Thailand (in Bangkok, Chiang Mai, Krabi and Phuket), Drew and I flew back to Shenzhen (where we had previously been, a week before), arriving on January 26th.  At this point, our plan was to head west and visit Tibet (in southwest China) and Xinjiang (in northwest China).  However, we hadn't planned the details of how we would get to these places, what order we would visit them, and where else we would go.  To complicate matters, the great snow storm of 2008 had hit southern China, and there were essentially no trains leaving Shenzhen at this time.  We spent a few days in Shenzhen meeting up with a few people we knew while we tried to figure out what to do next.  We met Mike, one of the other teachers from my school, after his "12 hour" train left 12 hours late and then stopped several times on the way, delaying its arrival another 36 hours and arriving in Shenzhen 48 hours after it was supposed to.  (The delays were due to the snow storm).  He missed his flight to Thailand and had to buy another ticket :(.  We also met up with Anna, one of my students, who was in nearby Guangzhou visiting her brother. 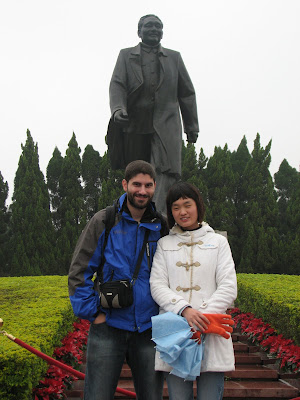 Anna and I in front of the statue of Deng Xiaoping in Shenzhen.

After researching our options, Drew and I realized that the easiest way to get to Tibet is from Chengdu in Sichuan province.  Chengdu is a good city to visit in its own right, but both of us had been there before (I went there with Mari and Tim when they came to visit at the start of the summer).  We were told that we would probably not be able to get a train ticket out of Shenzhen for at least another week, so we took the financial hit and flew to Chengdu.

We arrived in Chengdu on January 29th.  Our hostel (Sim's Cozy Guesthouse, which I highly recommend!) had a travel agency that was able to organize most of the rest of our trip--they got us our Tibet entry permit, and discount airfare to Tibet and Xinjiang.  Unfortunately, it takes a few days for the Tibet entry permit process, so we hung out in Chengdu until February 1st.  For the most part we just relaxed and walked around town a bit.  One night we went to see a Sichuan opera performance, which was really, really cool.  Unfortunately, my camera batteries died during the show, and the end was the best part.  The end included the most amazing hand shadow puppets I've ever seen, some fire-breathing, and this incredible face-changing performance.  During the face-changing routine, the performers wore masks that they would change in a split-second.  I still have no idea how they do it, and apparently it's a closely guarded secret passed down from master to apprentice. 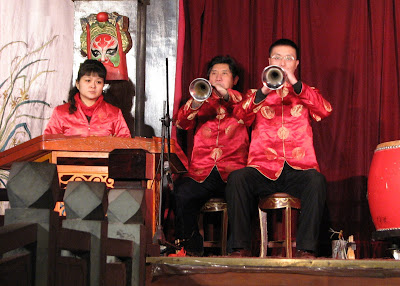 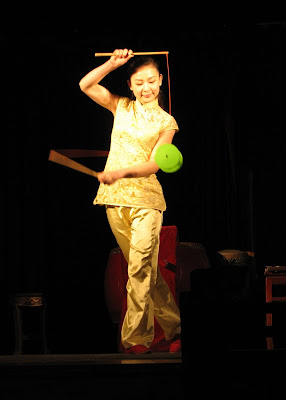 Part of the show was this acrobatics/yo-yo performance. 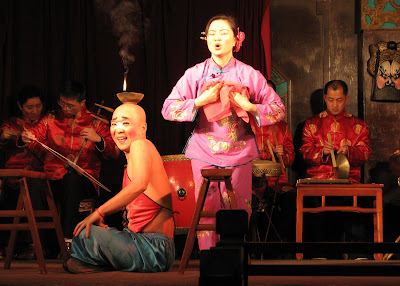 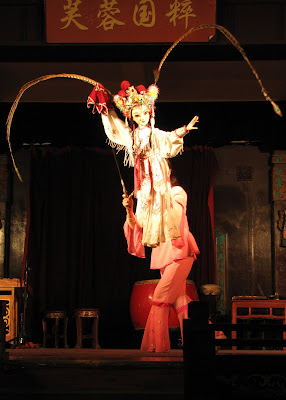 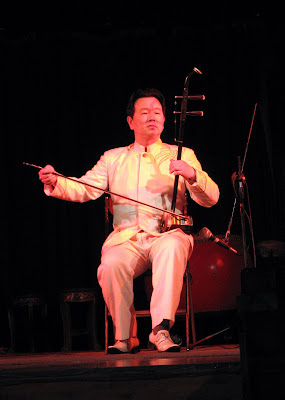 I found this video on youtube.  It isn't Sichuan opera shadow hand puppets, but the skill level is comparable, and the Sichuan opera performer did some similar things.  This will give you a good idea what it looked like.

Another youtube video I found, of Sichuan opera face-changing.  Check out how fast the performer changes his mask! 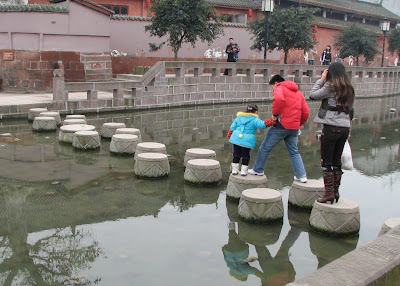 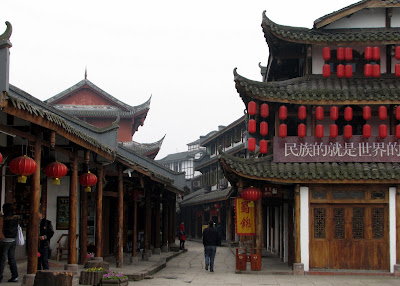 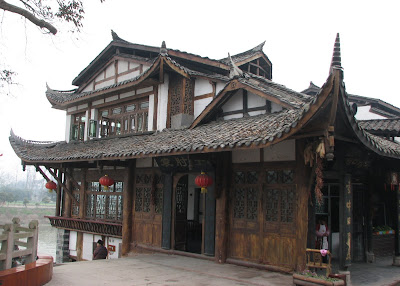 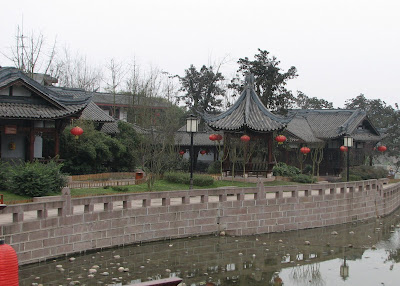 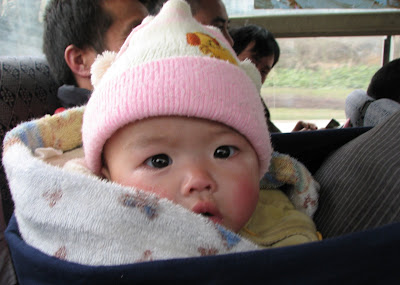 Chinese babies are pretty amazingly cute, and this baby that I met on my ride back to Chengdu was no exception.

The last thing worth mentioning from our time in Chengdu is our hot pot meal.  Hot pot is an entirely different style of cuisine from "regular" Chinese food (i.e. Chinese dishes).  We have it Qinhuangdao, and I eat it occasionally, but Sichuan is the birthplace of hot pot and it's quite different from the hot pot we have in Qinhuangdao.  Sichuan is famous for its spicy food, and the hot pot is no exception.  When Mari, Tim and I visited Chengdu in the summer, we tried to get a hot pot meal, and it was an unqualified disaster (I won't recount that whole story here, but ask me sometime if you want to hear it).  Luckily, Drew has much better Chinese than I do, and he was able to get us some good ingredients.  It was a bit too spicy for overall tastes, and I don't like to eat hot pot very often, but overall, it was a great meal. 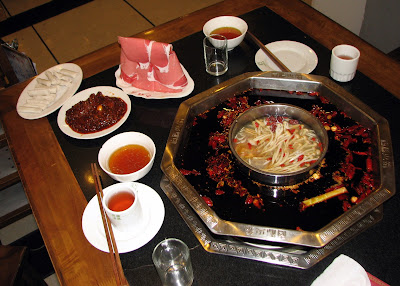 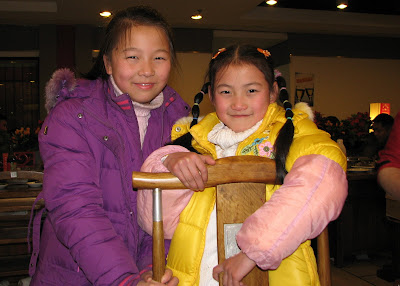 Some Chinese girls at the hot pot restaurant who kept coming over and staring at us.  Gotta love being a foreigner.

We got our Tibet permit on February 1st and flew to Lhasa, Tibet that morning.