After our time in Urumqi and Kashgar, Xinjiang, Drew and I needed to head back east, so that Drew could make it back to his school on time for the start of classes the next Monday (my classes didn't start for another week).  Our original plan was to take a train from Kashgar to Urumqi (which lasts 24 hours), and then take the train from Urumqi all the way to Beijing (which is another 48 hours or so).  We managed to get train tickets from Kashgar to Urumqi, but the train tickets from Urumqi to Beijing were all sold out, unless we wanted to stand for 48 hours (and you can imagine how we felt about that prospect).  We decided to see what kind of discount airfare we could get.  Urumqi to Beijing was pretty expensive (about 2,000 RMB or $300, if I remember correctly), but there was a flight to Xi'an for less than 1,000 RMB.  Xi'an is one of the main train hubs in central China, and there are lots of daily trains to Beijing (taking 12-24 hours).  Drew and I also know a student from a Xi'an suburb, so we called Rayleigh up to see if she could help us out and buy our train tickets in advance.  Unfortunately, tickets from Xi'an to Beijing were almost entirely sold out, but Rayleigh managed to buy us one of the last tickets left--a standing ticket on the slowest (24 hours!) train to Beijing.  The ticket was a train leaving two nights after we arrived, so Rayleigh invited us to come hang out with her family for a few days.  We spent February 14th and 15th in Pucheng (a suburb of Xi'an) with Rayleigh and her family.  This was still during spring festival, so we got to meet all sort of aunts, uncles, cousins and grandparents. 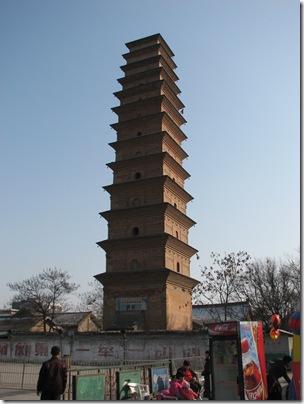 The ancient pagoda of Pucheng. 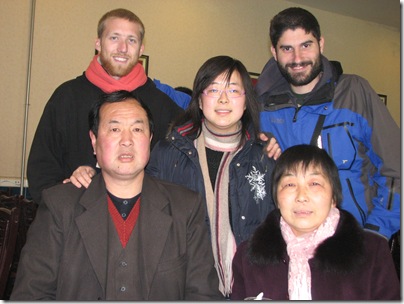 Drew and I with Rayliegh and her parents. 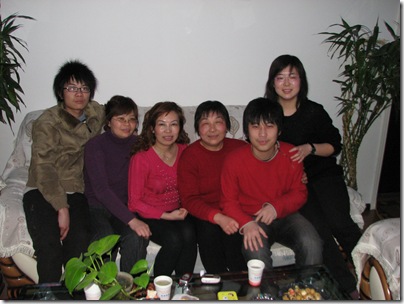 Rayleigh with her mom, two aunts and two cousins.

When we arrived in Beijing, Drew headed back to Qinhuangdao to start his classes.  I still had a week, so I headed to Handan to visit two students.